My main concern for this particular installation is in reference to 690.64(B)(2). The new 400-amp subpanel is being supplied by 400-amp disconnect which is fed by a line side tap ahead of the service-main disconnect. The same new 400-amp subpanel is also being backfed by a 300-amp breaker which is a sizeable residential photovoltaic installation. The second sentence in the code section referenced does specify that “the rating of the first overcurrent device directly connected to the output of the utility-interactive inverter(s) shall be used in the calculations for all busbars and conductors.” However, the first panel directly connected to the output of the inverters is a PV ONLY subpanel. If there are more loads added to the new 400-amp subpanel, its busbars are at risk of serious overload from both overcurrent devices supplying power to it.

Please feel free to impart your subject matter expertise in this scenario. If this is not a code violation, I feel that in this case, the code section may be poorly written, and it has allowed this type of scenario to occur. I look forward to any guidance you may be able to provide. Thank you very much.

You have asked a very interesting question and one that often arises. You have requested that the answer be based on the 2008 NEC, and I will accommodate that, and at the same time try to provide some insight on the same requirements up to the proposed 2017 NEC.

The plan that you have provided is difficult to read, but I will begin with what you indicate to be a “PV ONLY” panel. To properly determine the output of this panel it would be necessary to know the inverter output current and not the size of the overcurrent device that the output is connected to. The requirements for this calculation are located in Sections 705.60 (A) and (B) and those requirements state that the inverter output is based on 125% of the maximum inverter output ampacity that is labeled on the inverter. This labeling is required by UL 1741 Standard for Inverters, Converters, Controllers and Interconnection System Equipment for Use With Distributed Energy Resources, Section 63.2.

Of course, as this panel is being used to incorporate all of the inverter output circuits, it would be the input as well as the output. This type of an installation is sometimes called an “AC Combiner Panel” although there is no such description in the NEC. There are different micro-inverter systems that can be used; however, for this example I have used the data sheet provided by Enphase for their M250 micro-inverter and that sheet indicates that the maximum power output at 240 volts is 240 watts and 1 ampere, and the maximum number of inverters per 20 ampere circuit is 16, thus allowing for the 125% requirement. The drawing as submitted indicates a total of 210 modules each with a micro-inverter for a total output current of 210 amperes times 125% for the continuous loading factor requires a minimum conductor ampacity of 210 x 1.25 = 262.5 amps.

Section 705.60(B)(1) would require conductors to be rated not less than 262.5 amps, and it also references Section 240.4(B) which would allow the next standard size overcurrent device to be used, and according to Section 240.6 that would be 300 amperes. This illustrates that so far the installation as you have described meets the requirements of the NEC on the PV output side. I have not included an evaluation of the various strings and the adjustment and correction factors associated with each as that is not what you have inquired about.

Above, I mentioned the use of a panelboard to hold all of the inverter output circuits of any onsite energy system, and that is not adequately covered in the 2008 NEC. However, it is better addressed in later versions of the NEC in Section 705.12(D) where the language reads as follows and allows loads to be taken out of the panelboard as well, provided you don’t exceed the maximum bus rating of the panelboard.

Now we have established that based on the information provided the 300-ampere rating is the correct one to be used for determining the effect of the PV system on any associated panelboards that it is connected to. The two diagrams differ slightly at the “New Panelboard” as the smaller scale diagram shows a 125-ampere breaker in the panelboard but doesn’t indicate why it is there, yet the larger scale diagram indicates that it supplies existing loads. If it does supply loads, it really doesn’t play into your question as long as it is placed on the bus between the utility supply and the PV supply. You are correct that the rating of this panelboard—if the bus rating is 400 amperes—does not meet the requirements found in 690.64(B)(2) of the 2008 NEC, nor would it meet current NEC requirements. 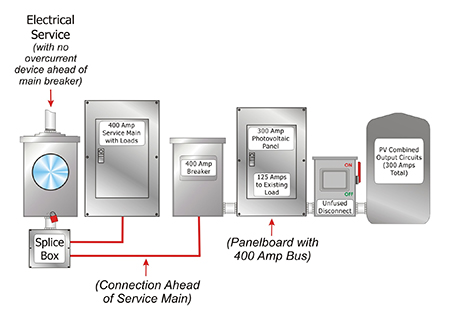 The diagrams also mention “line side taps.” I prefer to call these “connections” ahead of the service main as they are not taps as defined in Article 240 and should not be treated as such. In the diagrams, the small scale diagram indicates that there is an existing meter/main, and the connection is made between it and the existing panelboard. If this is the case, then this should not be considered a connection ahead of the service main as it is after the service disconnect/overcurrent device.

This could allow up to 700 amperes on these conductors, 400 from the service and 300 from the PV, and lead to a serious overcurrent condition. The easiest way to rectify this installation would be not to use the new 400-ampere panelboard but to make an actual connection ahead of the main provided the ampacity of the service conductors is equal to or greater than the PV output ampacity. In this case, the conductors that are sized for the 400-ampere service are larger than the 300 amperes being delivered by the PV system thus they should be fine.

One thing to recognize with a connection made ahead of the service main is that in the 2008 NEC, there were no limitations made on the length of the conductors from this connection to the inverter AC disconnect thus they would be subject to utility fault-current considerations for their entire length. Later editions of the NEC place a 10-foot restriction on these conductors and mandate that if the inverter disconnect is not within the 10-foot limit, then either an additional overcurrent device or current limiters need to be placed on these conductors within the 10 feet.

I hope that this adequately answers your question. Please feel free to reach out if you require further information. 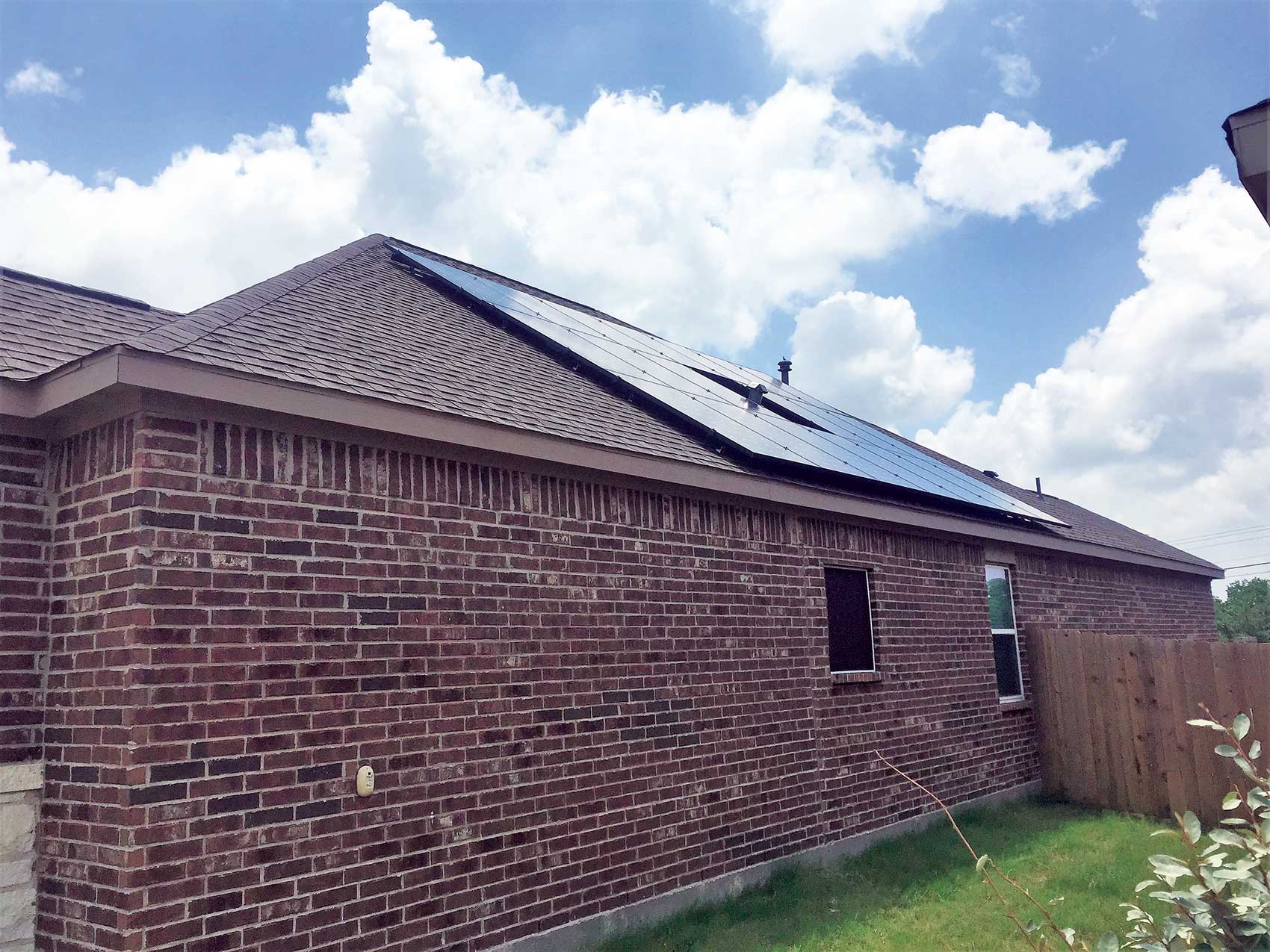 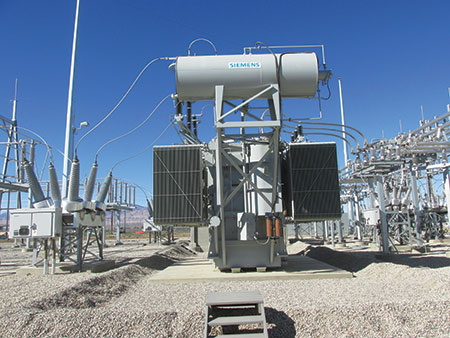 This article addresses the possible pitfalls in the construction and installation of privately owned generating substations as well as some other unique types of installations. 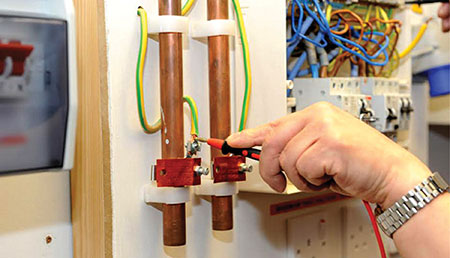 For all protective conductors, including main and supplementary bonding conductors, electricians must perform a continuity test using a low-reading ohmmeter. For main equipotential bonding, there is no single fixed value of resistance above which the conductor would be deemed unsuitable.