A ground-fault circuit-interrupter (GFCI) is an effective means of preventing severe electrical shock. A GFCI is a fast-acting device designed to shut off electric power in the event of a ground-fault within as little as 1/40 of a second. A ground-fault is an inadvertent contact between an energized conductor and ground or an equipment frame. The return path of the fault current is through the grounding system and any personnel or equipment that becomes part of that system.  A GFCI circuit breaker works by comparing the amount of current going to and coming back from equipment on a circuit and shuts off power when an imbalance is detected. GFCI protection can prevent severe electrical shocks and play an important safety role in protecting human life. This safety device is particularly important in areas where water or moisture may be present.

In this article, we are going to discuss the importance of GFCI technology, how to properly install a GFCI circuit breaker, and the expansion of GFCI requirements per the National Electric Code® (NEC®) up to and including for the 2020 Code cycle.

GFCIs have been required by the NEC for installation in new construction since the mid-1970s. Since 1973, the number of electrocutions has decreased by 81%, however, there are still more than 200 deaths per year due to electrocution.1 The Consumer Product Safety Commission estimates that 47 percent of current electrocutions could be prevented with proper GFCI protection. Over time, the expansion of GFCI requirements has increased in areas of the home (dwellings) and non-dwellings to provide increased protection for human lives.

It’s important to note that GFCI devices should only be installed by a qualified person. A qualified person is a defined term in Article 100 of the NEC as “one who has skills and knowledge related to the construction and operation of the electrical equipment and installations and has received safety training to recognize and avoid the hazards involved.” An example of a qualified person could be a licensed electrical contractor. A list of licensed electrical contractors may be available from state and local enforcement organizations as well as labor organizations. A local IAEI Chapter or Division is also an excellent resource for information.

Installing a circuit breaker involves working near equipment that can deliver lethal levels of electrical current. While the main circuit breaker serving the panel will be turned off, remember that the incoming conductors from the utility service and the lugs where the conductors terminate may remain energized. NFPA 70E, Electrical Safety in the Workplace, provides guidance on items such as de-energizing equipment, placing equipment in an electrically safe work condition, lockout tagout and personal protective equipment (PPE).

How to Properly Install a GFCI Circuit Breaker

Step 1. Shut off the power

Step 8. test the gfci circuit breaker as directed by the manufacturer

After installation of the GFCI circuit breaker, it’s important to instruct the occupants of the home on test procedures and the importance of periodic testing. Test procedures can be found in the installation instructions that come with the GFCI breaker.  It is also beneficial for the homeowner and others who work on this equipment to understand exactly what this circuit breaker is controlling. Always identify this information on the panel directory in ink or typewritten text for years of reliability.

The 2020 National Electrical Code revision process has been completed. Similar to previous editions of the NEC, the 2020 edition includes expanded requirements for GFCI for personnel.

First, let’s recognize the type of protection that applies to the expanded GFCI requirements. GFCI and Ground-Fault Protection of Equipment are both defined in NEC Article 100. Due to the fact that the expanded requirements are for personnel protection, we can focus on the definition of GFCI, which states that it is “a device intended for the protection of personnel that functions to de-energize a circuit or portion thereof within an established period of time when a ground-fault current exceeds the values established for a Class A device.” There is also an accompanying informational note that states, “Class A ground-fault circuit interrupters trip when the ground-fault current is 6mA or higher and do not trip when the ground-fault current is less than 4mA. For further information, see UL 943, Standard for Ground-Fault Circuit Interrupters.”

It’s important to understand that the current levels mentioned in the informational note correlate with what is typically called the “let go” threshold. This threshold is considered the maximum amount of current that can pass through the body of a person at which that person can still release or let go of their grasp of an energized conductor (see figure 3). At current levels higher than 5mA, persons may not be able to release themselves. As current levels increase beyond 10mA, a person may experience muscle contractions, respiratory arrest, ventricular fibrillation, or nerve damage. Current levels of 30mA and above can be fatal. To help put those levels in perspective, a television draws about 1A, a laptop charger about 2A, and a household toaster about 7A.

Now let’s examine some of the expanded GFCI requirements. Our first stop is Section 210.8(A), Dwelling Units, where three revisions where made. First, the parent text was changed and now requires all 125-volt through 250-volts receptacles, regardless of amperage, to have GFCI protection for personnel where supplied by single-phase branch circuits rated 150 volts or less to ground. The previous 20-ampere threshold has been removed and the voltage requirement has been expanded to 250 volts. In reality, the same shock hazards that exist at 125-volt receptacles exist with 250-volt receptacles.

Second, paren (5) has been revised to include finished and unfinished areas of basements. The previous language limited GFCI protection to only unfinished portions of basements not intended as habitable rooms was removed. The revision takes into account the concern that conductive floor surfaces may exist in finished and unfinished basements. In addition, basements, whether finished or unfinished, are prone to moisture and in some cases flooding. Third, a new paren (11) has been added that includes indoor damp and wet locations. These locations have been added to address areas such as mud or changing rooms, where there may be an increased shock risk due to moisture or saturation.

Continuing, a new 210.8(F), Outdoor Outlets, appears in the 2020 NEC. This requirement is specific to dwellings, other than those covered in 210.8(A)(3), Exception to (3), which addresses outdoor receptacles associated with snow-melting, deicing, or pipeline and vessel heating equipment. All other outdoor outlets that are supplied by single-phase branch circuits rated 150 volts or less to ground, 50 amperes or less, are now required to have GFCI protection for personnel. This includes equipment such as pumps and compressors. The use of the term outlets in the requirement makes it clear that GFCI protection is required if the equipment is cord and plug connected or hard-wired. Unfortunately, there have been documented fatalities associated with outdoor outlet connected equipment. This expansion of GFCI protection will help to prevent any future loss of life. An exception was also added for lighting outlets other than those covered in 210.8(C) for crawl spaces.

Now let’s review the changes to Section 422.5, Ground-Fault Circuit Interrupter (GFCI) Protection for Personnel, where five revisions were made to enhance the GFCI requirements associated with specific appliances. First, the parent text was changed and now requires all appliances identified in this section that are rated 150 volts or less to ground to have GFCI protection for personnel. The previous threshold was 250 volts. The 60 amperes or less, as well as single or 3 phase thresholds, are unchanged. Second, paren (1) has been revised to require all automotive vacuum machines to be provided with GFCI protection, not just those provided for public use as stated in the previous edition of the NEC. Third, bottle fill stations have been added to paren (2), which previously was limited to drinking water coolers. Bottle fill stations have become more and more popular in public facilities such as airports, cruise terminals, and hotels. The fourth change adds new paren (6) to address sump pumps because of their potential to be handled while still damp or wet. Lastly, a new paren (7) was added for dishwashers. Previously dishwashers were addressed in 210.8(D), which limited the GFCI protection when they were installed in dwelling units only. Now all dishwashers, regardless of location, that meet the voltage and amperage thresholds noted in the parent text of 422.5(A), are required to have GFCI protection.

Ground-Fault Circuit Interrupters have saved thousands of lives since their introduction to the National Electrical Code in the 1970s. The expansion of these safety devices is imperative to protecting persons and property from the hazards arising from the use of electricity, which is the purpose of the NEC. It’s important that those of us in the electrical industry share information about why these devices are necessary with those who are not familiar with their importance as it relates to personnel protection.  Timely adoption of the most recent edition of the NEC is also an important part of providing the public with the most up to date safety-driven installation requirements. States, counties, and local municipalities should also give serious consideration to implement licensing requirements for authorities having jurisdiction and electricians to ensure NEC compliant installations. 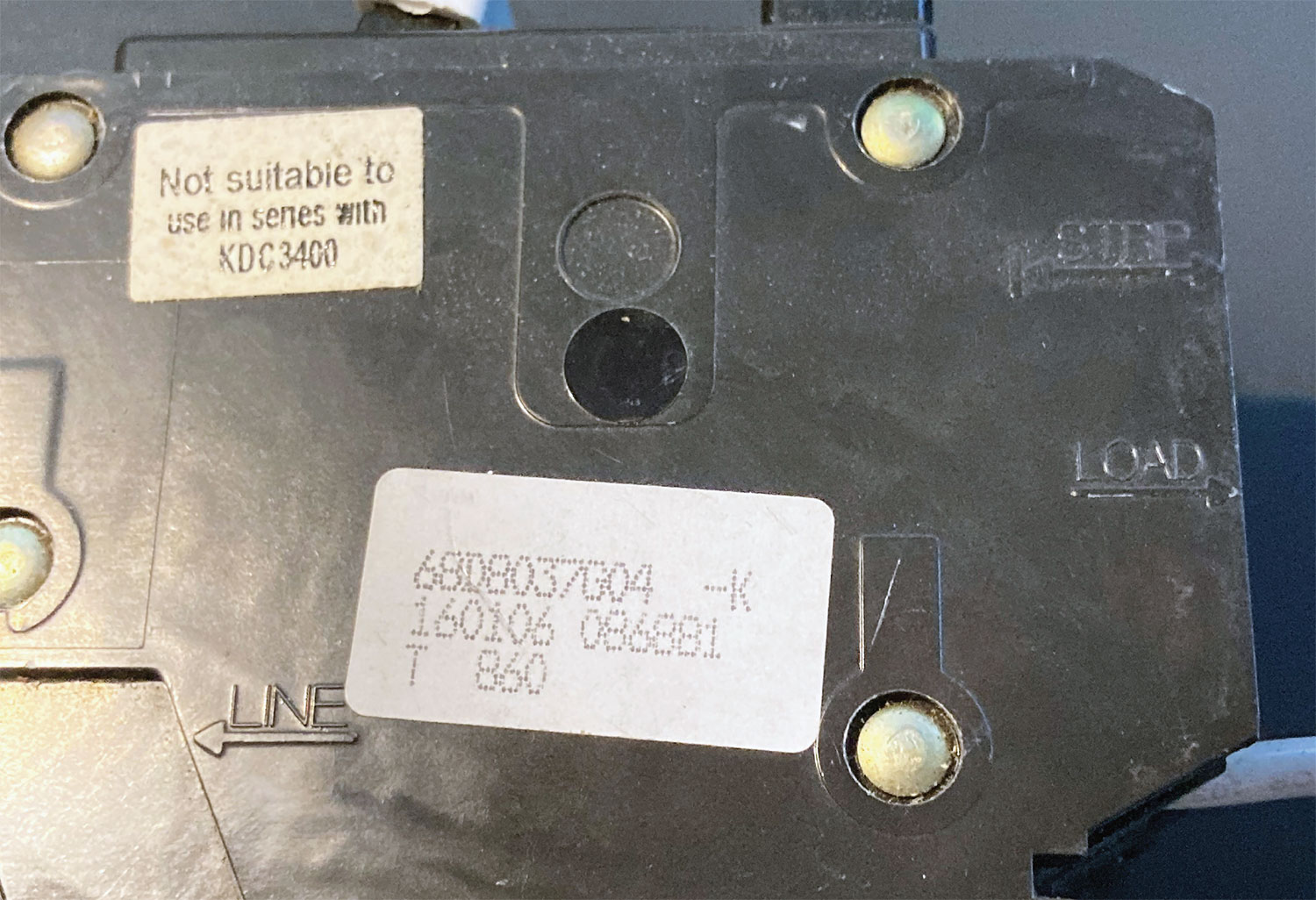