Rule 4-006 introduced Table 39 into 2012 edition of the CE Code (and its newly improved version incorporated into the 2015 edition) has certainly created lots of buzz (including arguments, frustration, confusion and questions) among the Code users.

However, over the past four years the Code users slowly accepted the fact that although the vast majority of conductors and cables on the Canadian market have insulation temperature rating of 90 ⁰C (i.e., TECK90, AC90, NMD90, RC90, RA90, FAS90, NS90, T90, etc.), ampacity of these 90 ⁰C rated conductors must be selected from the temperature column of the applicable ampacity table, based on provisions of Rule 4-006 for a maximum allowable termination temperature of these conductors or cables on electrical equipment.

So, the originally created buzz on this issue started to subside.

But 2015 edition of the Code has re-ignited the discussion (and ensuing controversy) with the introduction of Rule 4-004(23) and Table 39 into the Code.

Rule 4-004(23) appears to be quite innocent and straightforward, as it provides a notwithstanding clause to the provisions of Rule 4-006 in respect to maximum allowed termination temperature, when service conductors for a single dwelling, or feeder conductors for a dwelling unit in a row housing, or in an apartment building are selected. In this latter case, size of such conductors is permitted to be determined from the values indicated in Table 39 (instead of being based on the requirements on Rule 4-006).

So, what is the problem?

Rule 4-004(23) states that it applies to such service/feeder conductors terminating on equipment having termination temperature of not less than 75 ⁰C as follows:

“4-004(23) Notwithstanding Rule 4-006, 3-wire 120/240 V and 120/208 V service conductors for single dwellings and feeder conductors supplying single dwelling units of row housing of apartment and similar buildings and terminating on equipment having a conductor termination temperature of not less than 75 °C shall be permitted to be sized in accordance with Table 39.”

The title of Table 39 also indicates that it applies to those cases when service/feeder conductors are terminating on equipment having a conductor termination temperature of not less than 75 ⁰C. (See below).

Let’s carefully review this Table to understand why many Code users are concerned by it. 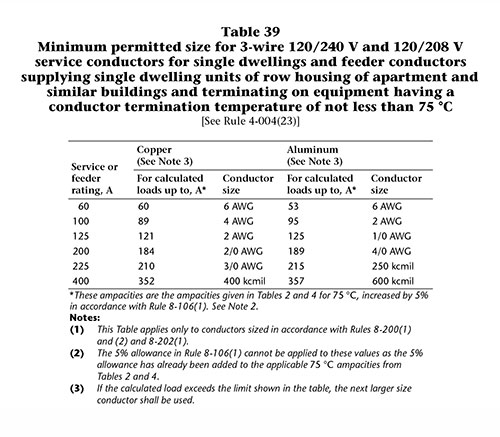 First of all, the note with an asterisk at the bottom of the table indicates that ampacities in this table are based on ampacities from 75 ⁰C column of Tables 2 or 4.

This means that based on Table 2, ampacity of

This also means that for aluminum conductors based on 75 ⁰C column from Table 4, ampacity of

The ampacity values shown above clearly indicate that with the exception of #6 AWG copper with ampacity of 65 A for calculated load of 60 A, all other conductors allowed by Table 39 to be used for installation in conjunction with calculated loads shown in this table have ampacities less than the calculated load permitted for connection to these conductors. This fact appears to conflict with the following fundamental safety requirement of Rule 8-104(2):

Secondly, it should be noted that Note (1) on Table 39 states that this table applies only when conductors are sized in accordance with Rule 8-200 and Rule 8-202(1). These concerned Code users indicate that Rule 8-200(1) mandates that the calculated load (and ampacity of service conductors) in a single dwelling with the area of 80 m2 or more is 100 A. However, Table 39 appears to disregard this fact by indicating for a service rated at 100 A, the calculated load and ampacity of conductors are shown with the values less than 100 A. This fact indicates a potential conflict with Rule 8-200(1) despite Note (1) on Table 39.

In addition, these concerned Code users point out that another fundamental criterion mandated by Rule 14-104(1) is violated by the provision of Table 39. Rule 14-104(1) requires the following:

“14-104(1) The rating or setting of overcurrent devices shall not exceed the allowable ampacity of the conductors that they protect, except

(a) where a fuse or circuit breaker having a rating or setting of the same value as the ampacity of the conductor is not available, the ratings or settings given in Table 13 shall be permitted to be used within the maximum value of 600 A”.

Thus, some regulators and educators are of the opinion that implementation of Table 39 in the Code creates a disservice to the Code users, as provisions of Table 39 not only flagrantly violate fundamental requirements of Section 8 and Section 14, but they might lead to shock and fire hazards in residential electrical installations.

It should be noted that a proposal to delete Subrule 4-004(23) and Table 39 has been submitted to Section 4 S/C, and this proposal will be subjected to rigorous deliberations by the S/C (including a public review process).

Meanwhile, as usual, local inspection authorities should be consulted regarding any concerns and questions on the application of Table 39.