In this article, we will discuss the fundamentals of bonding and grounding. To start, we should get an understanding of the difference between bonding and grounding. Bonding can be defined as a low impedance path obtained by permanently joining all non-current-carrying metal parts to ensure electrical continuity and having the capacity to conduct safely any current likely to be imposed on it, and to facilitate the operation of the protective devices in the circuit. Grounding is the installation of a permanent and continuous conductive path from an electrical system to the earth with sufficient ampacity to carry any current liable to be imposed on it, and of a sufficiently low impedance to limit the voltage rise above ground on non-current carrying conductive equipment components. The system referred to in this definition is any new electrical system created in an electrical circuit like the secondary of a transformer, power supply, or another source of power supply such as a generator, etc.

An easy way to remember the difference is:  systems are grounded, and equipment is bonded.

Systems to be grounded

The CE Code requires alternating-current systems rated over 50 V to be grounded if by so doing, their maximum voltage-to-ground does not exceed 150 V, or where the system incorporates a neutral conductor. In addition, circuits of less than 50 V are required to be grounded where supplied by transformers energized from systems of more than 150 volts-to-ground.

The conductor of alternating-current systems to be grounded is as follows:

Two-wire direct-current systems operating at not more than 300 V or not less than 50 V between conductors are also required to be grounded unless such systems are used for supplying industrial equipment in limited areas and the circuit is equipped with a ground detector. 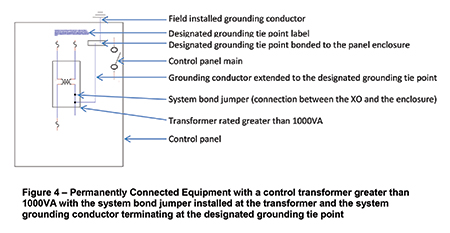 Equipment with secondary systems greater than 1000VA that are mandated to be grounded are required be grounded to a grounding electrode.

In addition to the caution notice, documentation provided to the end user is required to contain instruction for the end user to install a grounding conductor to the designated grounding tie point in accordance with the CE Code Part I.