The programmable logic controller (PLC) is a microprocessor-based system that accepts input data from switches and sensors, processes that data by making decisions in accordance with a stored program, and then generates output signals to devices that perform a particular function based on the application.

Two logic functions most common in motor control circuits are the “and” operation and the “or” operation. The “and” operation occurs when two contact devices are connected in series. For example, if two switches are connected in series, switch #1 “and” switch #2 must both be in the on position for the load to be energized. In terms of logic, this means switch #1 (input #1) and switch #2 (input #2) can either be in the on or off position. When both switches are on (logic state 1), the load is energized. When both switches are off (logic state 0), the load is de-energized.

The “or” operation occurs when two contact devices are connected in parallel. For example, if two switches are connected in parallel, either switch #1 “or” switch #2 can be in the on position for the load to be energized. In terms of logic, this means switch #1 (input #1) and switch #2 (input #2) can either be in the on or off position. When one of the switches is on (logic state 1), the load is energized. A truth table is a graphical way of showing how inputs and outputs behave according to logic function. The “ones” and “zeros” in the table are binary numbers that represent on and off states. Figure 3 illustrates PLC logic functions. Necessity for a programming language

A traditional motor control circuit is normally a hardwired system; therefore, any required circuit design change is a rather involved process in terms of material and labor. The manufacturing and automotive industries were interested in automating the motor control process in a way that offered flexibility to make circuit design changes easier. The interesting challenge was to design a programming language that would allow the industrial electrician a familiar way to communicate with the electronics of the PLC. This programming language would utilize symbols encountered in conventional ladder diagrams of the hardwired variety.

The original purpose of the PLC was to allow electro-mechanical and electronic input devices to communicate with a computer that would perform logical operations on the input data and output a corresponding signal to some form of output device (see figure 2).

In very simple terms, a PLC is designed to perform three tasks: (1) check the input status, (2) execute the program, and (3) update the output status. The PLC checks the input status by scanning each input to determine if the connected device is on or off and then records that information in memory. Next, the PLC has to execute the user program one line at a time to make decisions. For example, maybe the user program tells the PLC to turn on an output device if input #1 is on, and then turn off another output device if input #2 is off. The PLC will analyze these conditions and execute the appropriate action and then store that information in memory. Lastly, the PLC has to update the output status. This means it will send data to an output device such as the coil of a magnetic motor starter to enable some type of manufacturing process to begin. The time it takes the PLC to go through this cycle is called the scan time.

The following specifications are for a GE Fanuc PLC. This list will give you a sense of the type of information that is important in the selection and application of the PLC.

The programmable logic controller gives the end user a very flexible means to automate the control circuit process in a manufacturing environment. 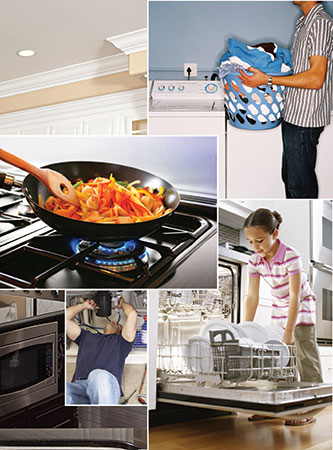 Grouping of Motors on a Single Branch Circuit